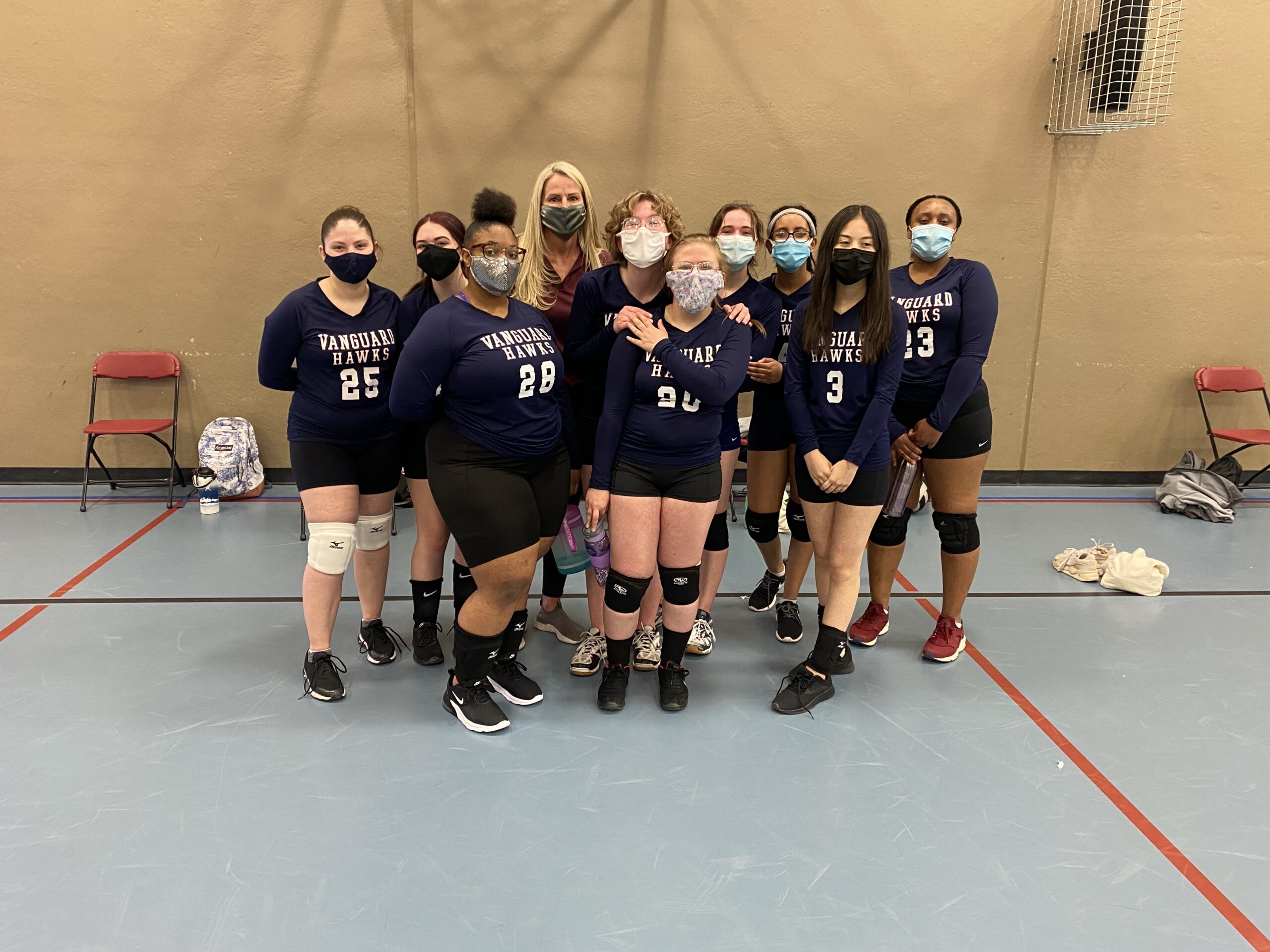 Cheer for the Hawks!

Hey! I’m Amanda Pippins. I’m excited to start coaching another year of middle school volleyball! I started playing volleyball in Kindergarten at YMCA and then I played through my senior year. I lettered varsity for 3 of my 4 years in high school. I played competitive club for 5 seasons. After high school I had an injury that prevented me from playing in college. I switched to coaching club volleyball for a few years. I took some time off to start a family. I then joined the coaching staff at Rangeview for 4 years. I transitioned to Columbia Middle school for 2 years. I joined Coach Alexander mid season last year. I’m excited to see these young ladies improve their skills each day! I want them to learn the basics of being a student athlete. I will challenge them every single day to be better than the day before.

Hello, my name is Jake Elmer and I am a 7-8 Social Studies teacher and coach at Vanguard Classical School. I have experience in Soccer, Cross-Country, Track, Swimming, and College Ultimate Frisbee. I have completed 3 marathons, one full Ironman Triathlon, and many smaller races. I have a passion for fitness and health, as well as soccer and coaching. I look to provide student-athletes with the best opportunity for success and enjoyment in their sport.

I served as a volunteer Cross-Country and Track coach, as well as the Assistant Boys Soccer Coach at my last school. I hope to help student- athletes build healthy habits, learn good character, and become the best athletes they can be.

Hello, my name is Taylor Alexander and I am excited to be the new middle school volleyball coach for Vanguard Classical School. I have played four years of high school volleyball and other varsity sports. I also worked as the assistant sports information director at the University of Lynchburg in Virginia for several years. This year I want to focus on having a fun and successful season while building on skills for the next level. I am committed to ensuring that every athlete has a positive experience that fuels their love of volleyball and competition.

Hey Hawks! I’m Olivia Cafone and I’m going into my second year as one of the kindergarten teachers at Vanguard West as well as the 4-8 cheerleading coach! After receiving my bachelors in psychology and masters in elementary education at Fairleigh Dickinson University in New Jersey, I chose to move to Colorado and I love it more everyday! If I’m not at school I love practicing yoga, reading, drawing, painting or hiking and exploring all the nature Colorado has to offer! I come from a background of dance & cheerleading myself so it’s been such a fun journey to bring back up that passion and share it with new faces at Vanguard.  I’m so excited for another year to help grow our team and cheer family we were able to create last year. Watching our cheerleaders grow and gain their confidence has been one of the most rewarding things for me!

I’m a 10 year Army veteran, retired. I have been a part of team sports all the way through high school. Baseball up through middle school and basketball through high school. Last year, 2021, I started coaching and have absolutely loved it. I love being a part of a team and teaching kids what it means to be part of a team. Looking forward to another great year of sports at Vanguard.

Hello, I am Dewayne Robinson, I am a certified exercise and fitness professional with certifications/ specializations in personal training, group fitness instruction, youth fitness, sports performance, weight management, behavior change, functional aging group exercise, senior fitness, and cardiopulmonary resuscitation (CPR). I was a former Unit Army Physical Fitness Test (APFT) Master Fitness Trainer and Weight Control Non-Commissioned Officer (NCO) for the Department of the Army. Serving a total of 13 years and eight months (including active and reserve duty time). I have also trained and coached for 16 years in various sectors. A former gym leader for the Boys & Girls Club and physical education coach for JumpBunch. I have also created an in-home personal training small business. I also am an avid runner and compete in marathons.

Coach Robinson states, “Being a coach is my DNA. Having the opportunity to assist in building students’ character, support them in overcoming setbacks, and empower them to give their best… even when things become challenging is the privilege I get to do daily. It is an honor and I am grateful to be along this journey with each of my student-athletes. Thank you!”

As a coach, I insist that my players understand that they are student-athletes, and that means academics come before athletics. When students truly love a sport, they work hard to make sure that their grades ensure eligibility. I believe in teaching players strong foundational skills upon which they can build strength, confidence, athleticism, and sportsmanship. My primary goal every season is to mentor players and help them to work together to become a team capable of playing well against any team they compete against. In our first year, with a roster of just 9 players, we were able to finish 5th in a league of 21 teams. Being part of a successful high school sports program prepares student-athletes to compete at the college level if they choose, and their participation in organized sports helps players develop into young adults who are ready for future challenges that may even include a professional career in volleyball. I am very excited for the upcoming ’22-’23 volleyball season!

My name is Jenny Young, and I am the head coach of Vanguard Classical School’s high school volleyball team.  My love of volleyball began in middle school in Conifer, Colorado. I went on to play varsity volleyball for four years at Bear Creek High School where I also lettered in track each year. In college, I played for a year at the University of Northern Colorado. After college, I played in various indoor and outdoor volleyball leagues and coached one season at Alameda High School. Although I continued playing volleyball consistently, I took a break from coaching until I had the opportunity to coach the middle school girls’ volleyball team at Cherry Creek Academy. I coached those players for four years and grew that program from just 12 players the first season to over 30 players my last season. In 2019, I had the privilege of coaching Cherry Creek Academy’s first-ever boys’ volleyball team. Most recently, I have been coaching the high school girls’ volleyball team at Vanguard Classical School where I also teach 6th-grade language arts and math.

Hello my name is Jeff Menke, this is my second year at Vanguard Classical. I currently teach PE K-8 at the West Campus, and the Athletic Director for both Middle Schools and High School. I moved to Colorado from St. Louis, MO. I received my Bachelors Degree in PE K-12 at the University of Missouri-St. Louis, where I played 4 years of College Soccer. I went on to receive my Masters degree in Athletic Administration at William Woods University.  I have been in education for 14 years. I have coached High School Soccer and Basketball for 18 years, and have been an Assistant Athletic Director for two years. As a High School coach, I have won 5 State Titles and numerous District Championships. I love to hike, camp, and anything that has to do with sports. I recently adopted a new pup named Nala. I am really excited to be the Athletic Director here at Vanguard Classical.

Hello my name is Victoria Cordova, I have been working at Vanguard Classical School East for 5 years. At Vanguard I teach grades 7-12 for PE/Health, and I am the Co-Athletic Director for the Athletic Department. I love being able to see our students participate in sports and help them create a community with their coach and teammates. I recently got married in May of 2022, and love spending time with my family and pets! I look forward to this year of Athletics and getting to know the athletes!

Girls on the Run
Gear